Each animal was afflicted with his own set of injuries due to the abuse and neglect of the drug dealers they had belonged to. Shere Khan the tiger was underweight and malnourished. Leo the lion had an open, infected wound on his nose from being cruelly confined to a small crate. Baloo the bear was in the worst stateâ€”he had a severely ingrown harness digging into his flesh because it was never loosened as he grew in size. The harness was so ingrown that his flesh had begun to grow over and around it, and surgical intervention was required to remove the harness and clean his deep, infected wounds. Baloo’s surgery was the only time that BLT has ever been separated; during that period, both Leo and Shere Khan were agitated as they waited for the missing member of their family to return. 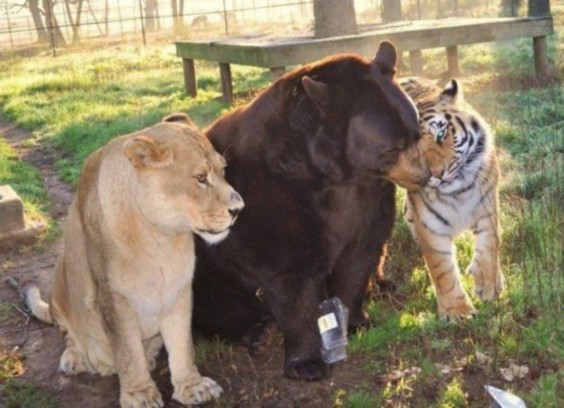 This entry was posted on Thursday, May 22nd, 2014 at 12:22 pm. You can follow any responses to this entry through the RSS 2.0 feed. You can leave a response, or trackback from your own site.